Music and Events at USNA 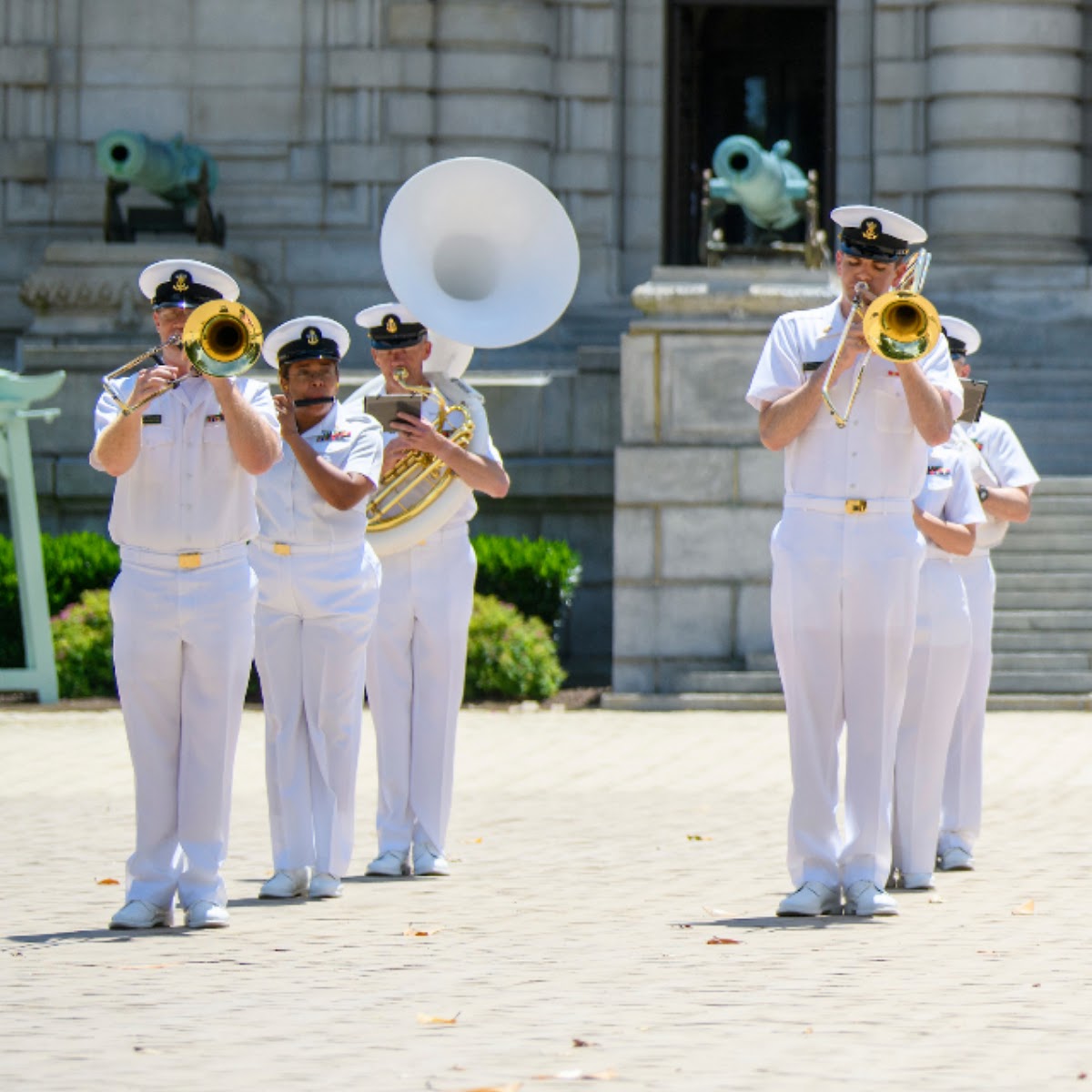 The United States Naval Academy hosts a wide variety of musical groups, each extremely talented and unique. Each group has performed on the Yard to the delight of many audiences, made up of other Midshipmen, faculty, staff, military personnel, and visitors. Concerts and special events are often highlights of the year for the Brigade of Midshipmen, and we’ve listed some below.

The USNA Pipes and Drums

Pipe bands are musical ensembles of bagpipers playing with a drum corps made up of tenor, snare, and bass drums. Although the establishment of the United States Naval Academy (USNA) Pipes and Drums band is relatively recent, similar bands have a much longer history of service to military organizations.

The Pipes and Drums band uniform includes a kilt made from Polaris Military Tartan. This tartan pattern was designed in 1964 for the men serving at the United States Navy submarine base in Holy Loch, Scotland. The dark blue and green background colors represent the ocean, while the gold and blue overchecks are for the two crews of a nuclear submarine.

Trident Brass is an ensemble of musicians and vocalists performing a variety of music, ranging from big band and jazz to rock. Trident Brass can be heard performing at various USNA functions, including dances, Parents’ Weekends, and Commissioning Week, as well as their own concerts.

The USNA is also host to both Men’s and Women’s Glee Clubs, which perform a wide variety of songs with amazing pitch and performance. You can see some of their performances online, such as this combined concert performance.

The United States Naval Academy (USNA) is proud to observe the significance of Black History Month in a memorable concert performed by the UNSA Gospel Choir. This musical ensemble beautifully weaves together the vibrance and energy of a traditional gospel choir with the discipline and dedication Academy Midshipmen famously possess. The choir is a multiethnic and multicultural assemblage, representing the wide array of faiths, history, and interests existing within the Brigade of Midshipmen. Their lively performances are inspirationally uplifting and their affinity for praise and worship through song is strong.

No longer restricted to religious services, oratorios are substantial musical compositions, interlacing the varied talents of an orchestra, choir, and multiple soloists into a singular production. In contrast to operas, oratorios are focused on the music and performed in concert form without the use of costumes or scenery.

The Glee Club’s Winter Musical is one of the USNA Musical Activities Department’s signature events of the academic year. With all the regalia of a true Broadway production, the Winter Musical is a sight to behold. The audience can expect to be treated to artistic set design, detailed costuming, and expert choreography. The cast of Oklahoma! will be accompanied by a live pit orchestra, further contributing to a Broadway-like experience.

Trick-or-treating throughout the neighborhood is just the sweet finale to an entire month filled with princesses, ghouls, superheroes, and other characters. The devilishly delightful day provides us with a temporary fantasy world to explore and enjoy before the bitter chill of winter sets in. At the U.S. Naval Academy, Halloween is the backdrop for one of the most anticipated events of the year, the Halloween Concert.

For the full eerie experience, it’s best to arrive early. The performance begins up to two hours before show time as ticket holders line up outside of the Chapel. There are frighteningly good times to be had enjoying the special effects that transform the building itself into a spooky scene, complete with costumed characters creeping about to haunt and entertain.

December brings with it a season of multi-sensory experiences. Twinkling lights softly brighten the night while the scent of freshly baked treats fills the air; but there may be nothing more powerful than music for eliciting the spirit of the season.

The USNA Messiah Concert is just one of many holiday events held at the Academy, and is open to the public.

The Midshipmen Classical Recital is an opportunity to showcase the incredible instrumental talents of the Brigade, some of which are vocal. These musicians often began training with intense discipline in early childhood. The level of discipline required for mastery undoubtedly aids their success at USNA, as well as allows the opportunity to continue performing as Midshipmen.

Anchors Aweigh’s cheerful and energetic melody has resonated with others worldwide. It has been adopted by other nation’s navies. For the Midshipmen of the United States Naval Academy, it lives in their hearts as the school fight song.