Naval Ads Through The Years 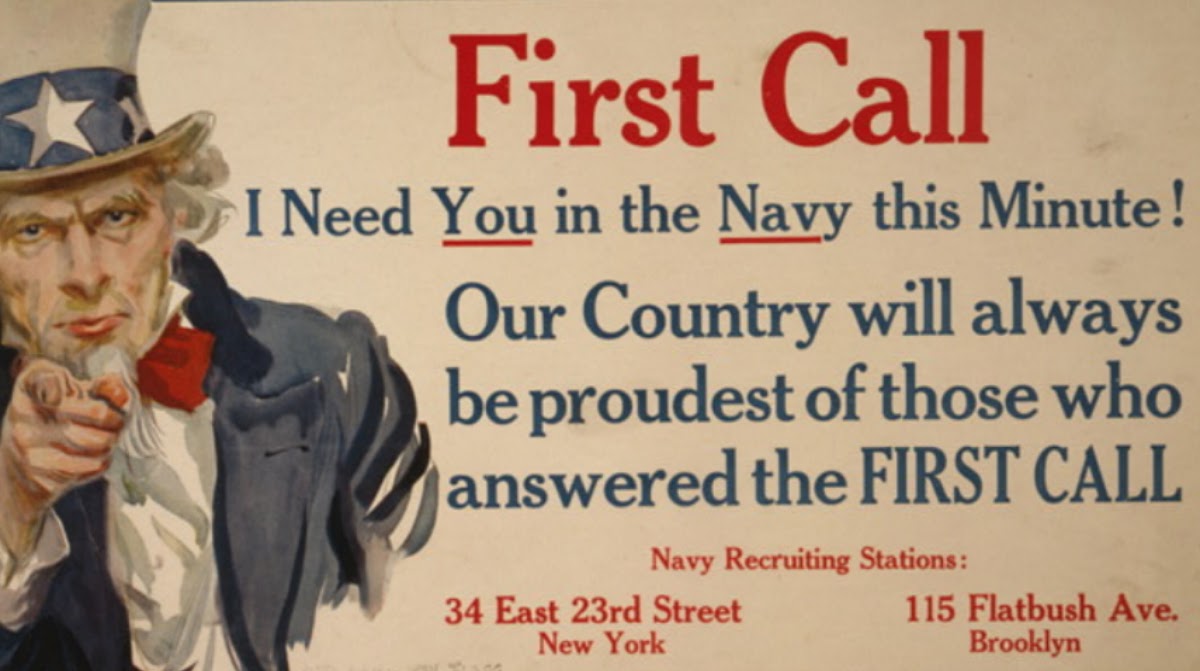 Naval history is rich in many ways. From the men and women who have defended our freedoms, to the ceremonies that mark long-standing traditions, to the monuments that recognize their sacrifices, there are constant reminders throughout the Naval Academy Yard of those who have contributed, in incalculable ways, to the defense of our country.

One of the most fascinating views of this history is through the lens of Navy recruitment efforts.

Different moments in recent history have inspired different ways of representing the Navy. Since the inception of its advertising efforts, the Navy has enlisted numerous advertising agencies. Each has incorporated many of the same elements into their campaigns, but each is tailored to the times in which they were created.

Wartime Rallies: I Want YOU

The first time modern military advertising entered the scene was during World War I, when the U.S. and Britain looked to drum up support for the costly war. In 1917, President Woodrow Wilson created the Committee on Public Information (CPI). With the help of agency N.W. Ayer & Son, this group produced the famous “I Wan 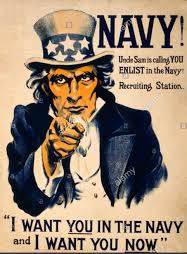 t You for U.S. Army,” with Uncle Sam. This was also adapted for the Navy. Another ad showcased a beautiful young woman with the same headline, and a Navy Publicity Bureau (NPB) poster created a different iteration with a young woman wearing a sailor suit and wishing to be a man so she could join the Navy. All were direct calls to enlist.

Fast forward to the second World War, and the Ad Council initiated by President Franklin D. Roosevelt designed print, radio and feature films, including a film documentary series, to recruit men to fight for the various branches of the military.

Many were also directed at women. Although they weren’t able to serve directly then, they had enormous roles and responsibilities in shaping the effort. 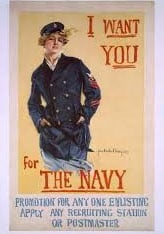 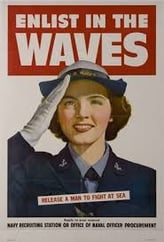 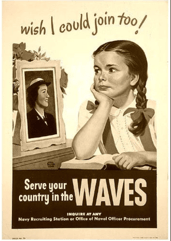 After the war in 1952, a “Join the Navy” PSA made a different emotional appeal, talking about the adventures and pay you’d get when you “get out of that rut you’re in. You’ll be doing a man-sized job in a big outfit….and when you retire you’ll only be 38!” In keeping with the times, it was directed at men between the ages of 17 and 31.

The Navy started its paid advertising campaigns through MacManus, John & Adams in the 1960s. In 1960, they created this commercial with a line-drawn cat and dog, talking about their presumed owner (shown in a photo in full dress), who went to the Navy Officer Candidate School (OCS). “Kinda lonesome,” they agree, clearly missing him. “But I’m awfully glad he did.” They discuss the excellent training and opportunities available through the school.

Do You Know These Taglines?
U.S. Navy Recruitment Slogans Through the Years:

In recent decades, the Navy has enlisted the efforts of different advertising agencies to craft ads and slogans. The slogans and ads below show the evolution and progress that the Navy, as well as its advertising efforts, have made.

This slogan came about in the years following the draft, and it was a difficult time for Navy recruitment. Working with the famous Grey Advertising, the Navy used “Be Someone Special” as their slogan from 1973 to 1976. At that time, the Navy sought a new slogan, leading to one that some consider to be the most popular ever.

Following their work with Grey Advertising, the Navy worked with Ted Bates & Company, introducing the slogans “It’s not just a job, it’s an adventure” and “live the adventure.” These slogans ran for over a decade, and provided the Navy with effective messaging that attracted recruits in the age 18-24 demographic. By showing what the Navy could offer them, and depicting distant and exotic locations, the advertisements that used this slogan proved extremely effective at attracting young adults looking to see the world and build an exciting career.

The BBDO Worldwide Slogans and Ads

From 1988 to 2001, BBDO Worldwide worked with the Navy to create three slogans:

These slogans were extremely impactful. The first two appealed to the individual and spoke of being more than just one person, presenting the idea that now, they could be something greater. And much like the adventure-focused advertising that the Navy used throughout much of the 1980s, the slogan “Let the Journey Begin” attracted young recruits looking for adventure and excitement in their lives and careers.

The Campbell-Ewald agency used these slogans to continue reaching out to the individuals seeking excitement and recruit them to the Navy by appealing to their sense of adventure. After that, they began to portray the difference the Navy made not only for its members and America, but the world at large. For a time, this message was “America’s Navy.” With the variety of opportunities and career paths the Navy has helped members achieve and the work that the Navy does across the globe, these slogans attracted people not only looking for adventure, but looking for ways to make a difference.

In 2017, Young & Rubicam (now part of VMLY&R) crafted this slogan, still in use. As of today, Navy recruitment has expanded to electronic media and online advertising. This matches the highlights of advanced technology and the wide reach of the Navy shown in the advertisements, showcasing the extent and diversity of the Navy’s work.

No matter where the message is or how it’s phrased, those attracted to Naval service exhibit a strong sense of honor and pride. These slogans and advertisements speak to that sense (and sometimes add an adventure component), and the messages continue to evolve with the times. What are your favorites? We can’t wait to see what comes next! 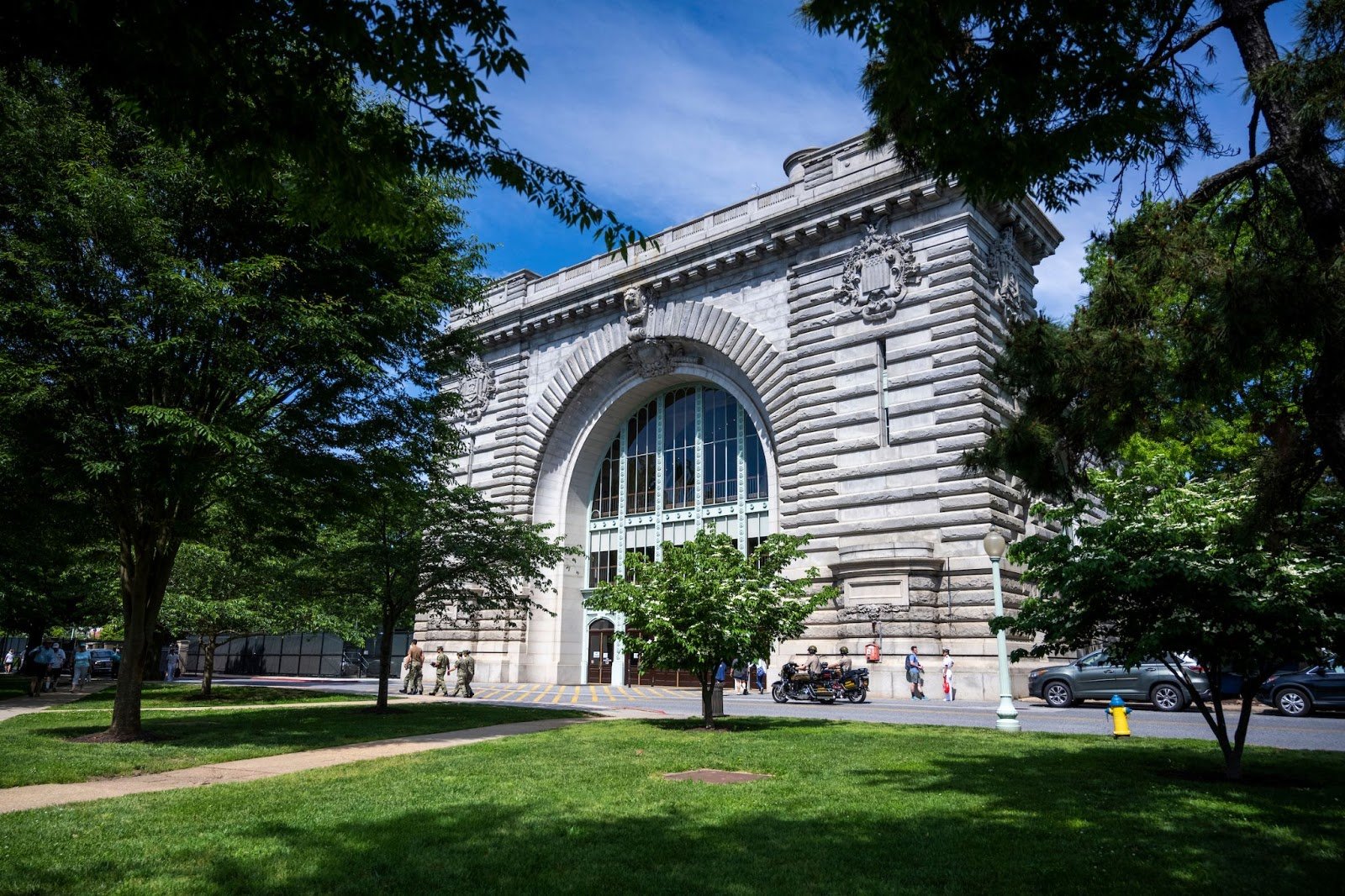 Over the Years: The U.S. Naval Academy’s Advancement