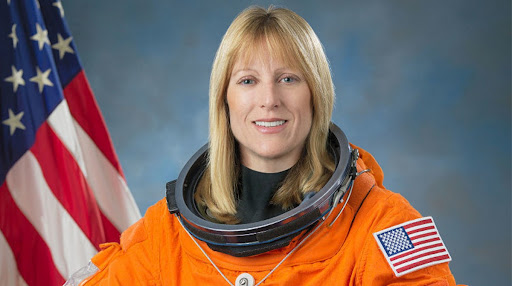 U.S. Navy Captain Kathryn P. Hire has defied expectations her entire life. Even she would never have predicted she’d be working for the Navy for three and a half decades, becoming a dual-career Navy Captain and NASA astronaut. This USNA graduate has a fascinating story, and one heck of a flight.

From Alabama to Around-the-World Flights

Born in Mobile, Alabama, Kathryn “Kay” P. Hire graduated from Mobile High School in 1977, inspired by the first women starting naval flight training in Pensacola, FL. She was accepted into the Naval Academy just one year after the USNA started admitting women. In 1981, she graduated with a bachelor’s degree in Engineering Resources Management and was commissioned as a naval officer, earning her Naval Flight Officer Wings in 1982.

From there it was an extraordinary ride. Captain Kathryn Hire became an Airborne Operational Mission Commander, flying worldwide oceanographic research missions to 25 countries on a specially configured P-3 Orion aircraft that featured Oceanographic Development Squadron Eight (VXN-8). She then parlayed this experience into instructing student naval flight officers, imparting her lessons learned in airborne navigation, all over the course of three years.

In 1989, her trajectory shifted. She left full-time naval ranks and started dual civilian and military careers as a Space Shuttle Engineer and a Navy Reserve Officer. She went on to earn her Master of Science in Space Systems Technology in 1991 from the Florida Institute of Technology.

Next, something incredible happened. While Captain Hire has had many groundbreaking moments in her career, one that stands out is May 13, 1993. On that date, she reported to Patrol Squadron Sixty-Two (VP-62) and became the first female in the U.S. military to be assigned to a combat aircrew. She served as part of Atlantic and Caribbean operations aboard the P-3 maritime patrol aircraft.

After some time serving Navy Reserve duty with various units based in Florida, Louisiana and Texas, Captain Hire was recalled to active duty supporting Operation Enduring Freedom and Operation Iraqi Freedom as a member of U.S. Naval Forces Central Command staff after September 11th. She, then again, shifted to part-time reserve status and served as Commanding Officer of Space and Naval Warfare Systems Command (SPAWAR) Unit 1010. She then became Commanding Officer of the Office of Naval Research/ Naval Research Lab (ONR/NRL) Unit 113, supporting projects at the Naval Post Graduate School in Monterey, California.

Then came another breakthrough. In March 1995, Captain Hire reported to the Johnson Space Center for training as a member of Astronaut Group 15, becoming the first astronaut selected from the Kennedy Space Center workforce.

In 1998, she made history again when she flew to space as a Mission Specialist 2, the flight engineer, on the Space Shuttle Columbia STS-90 Neurolab mission, from April 17 - May 3, 1998. The seven-member crew served as both experiment subjects and managers for 26 important life science experiments that studied the effects of microgravity on the brain and central nervous system for humans, rats, mice, crickets, swordtail fish and oyster toadfish. The trip was extensive; in their time in space, the crew orbited the Earth 256 times and covered 6.3 million miles, all while traveling 220 miles above Earth.

In 2010, Captain Hire went to space with Space Shuttle Endeavour for STS-130 from February 8–21, 2010. The mission this time? Space Shuttle Endeavour was on the 32nd mission to assemble the International Space Station. Hire and the crew delivered and outfitted Node 3, also known as Tranquility, as well as the Cupola, a seven-windowed portal for the space station.

She performed as Mission Specialist 1, operating the robotic arms, leading the transfer of 4,500 pounds of cargo and helping to install water recycling, air cleaning and cooling systems and crew exercise equipment in Node 3 and Cupola. For this trip, the crew covered over 5.7 million miles and completed 217 orbits of Earth.

While at NASA, Captain Hire fulfilled various roles. She worked in mission control as a spacecraft communicator (CAPCOM) and also served as the Astronaut Office Lead for Shuttle Avionics Integration Laboratory (SAIL), Shuttle Payloads and Flight Crew Equipment. She served on the Astronaut Support Personnel (ASP) team, traveling to Florida in support of crew launch and landing operations conducted at the Kennedy Space Center. Captain Hire also worked at NASA Wallops Flight Facility and NASA Goddard Space Flight Center, where she was chief liaison to the Department of Defense.

She retired after 35 years of service, in August of 2016. Captain Hire had spent more than 3,400 flight hours in various aircraft with the Navy and 711 hours in space. She retired from NASA on February 28, 2019, after being part of the team for 30 years.

In 2014, she returned to the Academy as an aerospace engineering instructor and director of innovation.

As you may imagine, Captain Hire has accumulated some impressive honors for her work. On the military side, she was awarded the Defense Superior Service Medal and received the Meritorious Service Medal four times. As a civilian working for NASA, she garnered the NASA Spaceflight Medal twice, and also received the award for NASA Exceptional Service. She’s served as space advisor to the Department of the Navy staff and commanding officer in the Office of Naval Research. She’s been a member of the Association of Space Explorers and a member of the Association of Naval Aviation. She has made presentations to a large variety of audiences regarding space, leadership, and STEM-related topics, all with her signature wisdom and enthusiasm.

The Academy is fortunate to count Captain Kay Hire as a graduate. She is one of a group of exceptional leaders that have gone on to serve our country in exceptional ways. We celebrate this USNA astronaut and those that are inspired by her work.

A Day in the Life of a Midshipman

Eight Great USNA Home Office Products to Give Yourself a Promotion