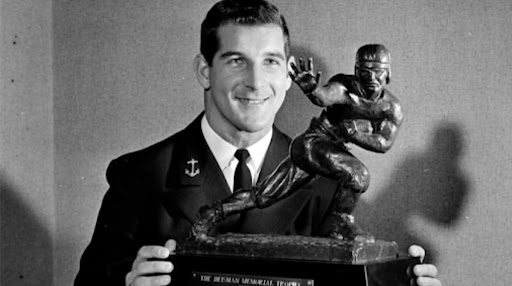 The Naval Academy has many heroes, some you know well and some you may not know much about - yet. Just over two years ago, we lost one of our all-time Navy greats, Joe Bellino. He was 81-years-old.

This modest man ignited a legendary football career when he rushed for three touchdowns (including a 46-yard run) to beat Army 43-12 his second class (junior) year at the Academy. As a first class (senior), he rushed for a record-breaking 834 yards with 15 touchdowns. His three season total was 31 touchdowns, 1,664 yards and 37 kicks returned for 833 yards. He set 15 school records.

Bellino was named an All-American halfback. But not only was he hot on the offensive, Joe proved a formidable defensive back at a time when it was common for players to play both offense and defense. His dual efforts helped Navy to a 9-2 record his first class year. That sealed his selection as the Heisman Trophy winner in 1960. He was the first Navy player to claim the coveted honor. His hard work also earned him the top two USNA athletic awards, the Thompson Trophy Cup and NAAA Sword - the first time one midshipman claimed both in 41 years. His number 27 jersey was retired. Bellino was becoming a legend.

Featured that year on the cover of Sports Illustrated, the article marveled at his style, “[Joe Bellino] runs like a berserk butterfly that happened to grow up to weigh 180 pounds. Above the waist he is muscular but not big; most of his weight is in those legs, which measure 18 inches in circumference at the calf.” Appropriately for a Maryland player, the article noted, “Tacklers say Joe can go sideways faster than forward, like a frightened crab.” He had hit the big time.

But let’s rewind a bit to understand the man behind the stats.

Joe was a consummate athlete, growing up in Winchester, MA, where he earned his nickname - the “Winchester Rifle.” His Sicilian immigrant father, Michael, was a factory and construction worker and his mother, Sara, was a homemaker. By the time he was ready to graduate from high school, over 100 schools were competing to have him play for them, including West Point. He chose Navy.

Bellino recollected how the game was different then, with more opportunities for him. “When I played at Navy, we were always in the top ten in the country, as was Army. That was because the rules then included single-platoon football, and now it’s two-platoon football - offense and defense. We only dressed about 33 players in any game; maybe 20 guys were on the field most of the time, so I very seldom left the field.”

Near the end of his first class year, he made an extraordinary play, intercepting a pass at the end zone to help solidify Navy’s 17-12 win. After the game, the USNA publicity director told him, “Hey, Joe, that interception won you the Heisman Trophy.” Bellino smiled, replying, “John, that interception prevented me from being the goat of the game.” He had fumbled the ball at Navy’s 17-yard line, and Army was going for the score just prior to that play. Fortunately, Bellino - and Navy - prevailed.

The Heisman Trophy opened numerous doors for him. Bellino recounts how a sportswriter said, “Joe, you just won the Heisman Trophy to go with the Maxwell, Associated Press and Chevrolet Player of the Year awards. Is there anything else you would like to accomplish this year?” His reply? “Another guy from Massachusetts did pretty well this year, President-elect Kennedy, so I would like to meet him.”

The next day, The Washington Post headline blurted, “Bellino Wins Heisman Trophy; Now Wants to Meet President-Elect Kennedy.” Joe finished the story, “A day later, I got a telegram from JFK saying, ‘Congratulations, I will send a limousine to the Naval Academy next Saturday, and I want you and all the other boys from Massachusetts to come and have lunch with me at my residence in Georgetown.’ So we did, and I have a treasured picture from that day.” That same summer, he was honored to deliver the class of 1961 Lucky Bag yearbook to the Commander in Chief as an ensign on special duty, and spent an hour with JFK in the Oval Office. Bellino also had an enduring relationship with enthusiastic military supporter and iconic comedian Bob Hope.

After U.S. Navy Football: Running with the Patriots

After graduating from the Academy, Bellino was commissioned for two years on a destroyer that was part of the U.S. blockade protecting U.S. Guantanamo Bay facilities during the Cuban Missile Crisis. As the Vietnam War dragged on, he served for two years as executive officer on a minesweeper out of Japan, ushering U.S. military advisors safely to shore in Vietnam. He recalled receiving a telegram from the Patriots inviting him to pro football camp while he was out there, “bouncing around the South China Sea.”

After serving his four required years with the Navy, Bellino joined the (then Boston) Patriots in 1965. He was a valued punt returner, wide receiver and running back, but didn’t play regularly due to a broken ankle. In 1968, he was drafted to the Cincinnati Bengals, an expansion team, but had lost his passion for the game and had a young family he was reluctant to move. “You know, you play golf every day for a month, then lay off for a week, and you lose the feeling,” he told The Boston Globe in 1968. “That’s what I lost.” Asked if it had come back, he said that it had, during the 1967 season, when “I felt like myself again.”

Bellino found fulfilling work in the years that followed, starting his own business catering to junior colleges and eventually moving into auto auctions and leasing. He also stayed in the Reserves, retiring as Captain Bellino. But he is remembered best for football, and touched countless lives through the game. One young son of the Assistant Navy football coach fondly recalls that Joe had given him his midshipmen cover at graduation in 1961. He returned it recently to Joe’s family, saying it should be with them. The man’s name? Bill Belichick, the wildly successful head coach of the New England Patriots.

On March 27, 2019, we lost Bellino to a hard-fought battle with stomach cancer. We celebrate his vast accomplishments serving our country as a U.S. Navy football star, midshipman and naval officer. His legacy lives on in the hallowed halls he walked and on the fields he conquered - like a berserk, beautiful butterfly. 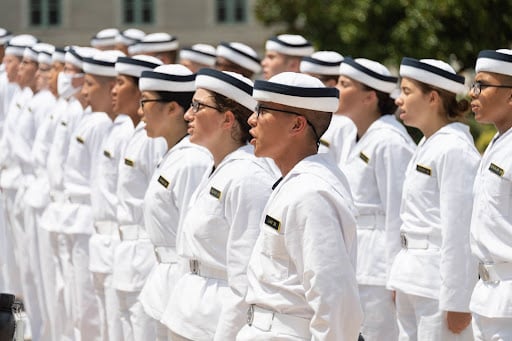 Treat a Midshipman: How to Order Essentials for Your USNA Student 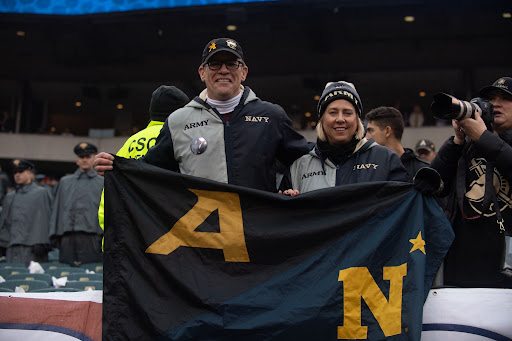 It's Time to Tailgate!